Everyone has a different path in life, and that’s OK! Today we’re talking to Michael de Ridder, who tells us about how getting into programming was accidental, not intentional. And that’s OK, too. 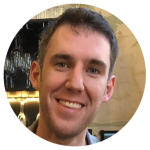 has worked in software development, data visualization, data science, research, consulting, and business analysis across health care, telecommunications, radio and finance. He enjoys the challenge of combining and utilizing the relationships between different domains and technology. A big fan of travel, Michael is a proponent for the benefits of work-life balance, believing that time away from a subject allows creativity to flourish.

Let’s learn from him how even a (perhaps drunken) accident can lead to good things and valuable lessons.

That’s a more interesting question than it seems. And it’s as good a time as any to say that I wouldn’t call myself a programmer. I recently heard my résumé described—in a job interview no less—as a drunkard’s journey. When the interviewer said drunkard’s journey, he definitely didn’t mean it as a negative, and in fact I took it as a compliment.
END_OF_DOCUMENT_TOKEN_TO_BE_REPLACED

This post is part of a series interviewing veteran developers, asking them questions about their journey to tech mastery and sharing the advice they have for those getting started. Today we cover a lot of topics, from whether you should go into programming or IT to being specific about what you set out to learn to the lessons you’ll never learn until you start working. 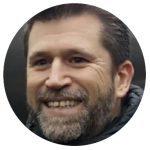 And we’re learning about all of these things from Gabriel Aizcorbe. Gabriel got into IT when he received his first 8088 at 14 years old. From then on, his whole life was about computers, programming languages, and learning more. As a project manager with PMP and agile methodologies, he gained experience in all kinds of projects in the local and international markets. He has a deep passion for data and analysis and is striving to launch a startup devoted to data manipulation and analysis while he works as DBA/BI consultant.

Let’s hear about the lessons he’s learned on his journey.

I’m a bit of an “un-stacked” person—more a “free soul,” if you will. I prefer to mix my own tools as I need to in order to achieve a goal. But, if I had to associate myself with a stack, based on the tools I use the most I would say  Microsoft stack. Either way, I have enough flexibility to change to a MEAN stack or whatever else comes along. In the end, they are still development tools.

And since when? Well, I started self-teaching when I was 14 years old. But let’s say that, formally, my first big development job was at 25. So I’ve been working for more than 20 years.
END_OF_DOCUMENT_TOKEN_TO_BE_REPLACED

It’s easy to get lost in the sea of programming languages. On top of that, there are some languages (I’m looking at you, JavaScript) that have a vast ecosystem of frameworks. Wikipedia has an exhaustive list of programming languages with several for each letter of the alphabet. I won’t count them, but there are at least 260 at a glance. There’s no way you can learn all of them. So, what languages should every programmer know?

If you want to know where to start, you can take a few approaches. Of course, this depends on what you want to do in your programming career.

If you want to build games, you should learn some common gaming languages (and platforms, too). For mobile app development, you would focus more on the languages used for iOS and Android development. Is data analytics your thing? It’s pretty hot right now! And if it is, you’ll want to learn data-centric languages, plus some languages that specialize in data analysis like R.

See what I mean when I say it depends on what you want to do? But if you don’t quite know where to begin, you might look at the markets. Are you interested in learning to code because it has a good job market? If that’s your game, then you might consider using the markets as your guide.

Also, you can ask around. Of course, if you ask five different people, you’ll get five different answers. But, you can always take the ones that are mentioned more frequently and start there. I’ll share my own list and see what others have to say on the topic, too!
END_OF_DOCUMENT_TOKEN_TO_BE_REPLACED

As programmers or aspiring programmers, we often focus on the technical skills we need to build software. We work on improving our programming skills, picking up new frameworks, or reading technical books to improve our knowledge of computer science.

However, those technical skills will only get us so far. As with most careers, we need to expand our learning and also focus on professional skills. And actually, these skills will make the technical side easier, as we’ll have more clarity on what we need to do to solve problems.

In this post, we’ll go over what non-programming skills programmers need to use in our jobs.

First and foremost, we need to be able to communicate with our fellow programmers, analysts, product managers, and customers. Without clear communication skills, requirements get lost or misunderstood. 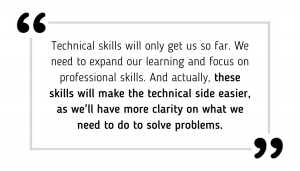 As a result of poor communication, programmers might build the wrong solution to the problem. Or their solution might make things difficult or clunky for the user because the programmer didn’t understand the problem correctly.

A lot can go wrong with communication. And since communication is the most important skill that we’ll cover, let’s break it down further.
END_OF_DOCUMENT_TOKEN_TO_BE_REPLACED

Writing documentation makes you a more valuable developer and will help your career. Documenting your code makes you a better developer and helps you design better systems. END_OF_DOCUMENT_TOKEN_TO_BE_REPLACED